Hip-Hop Entertained the Masses at the Halftime Show, but at What Cost? 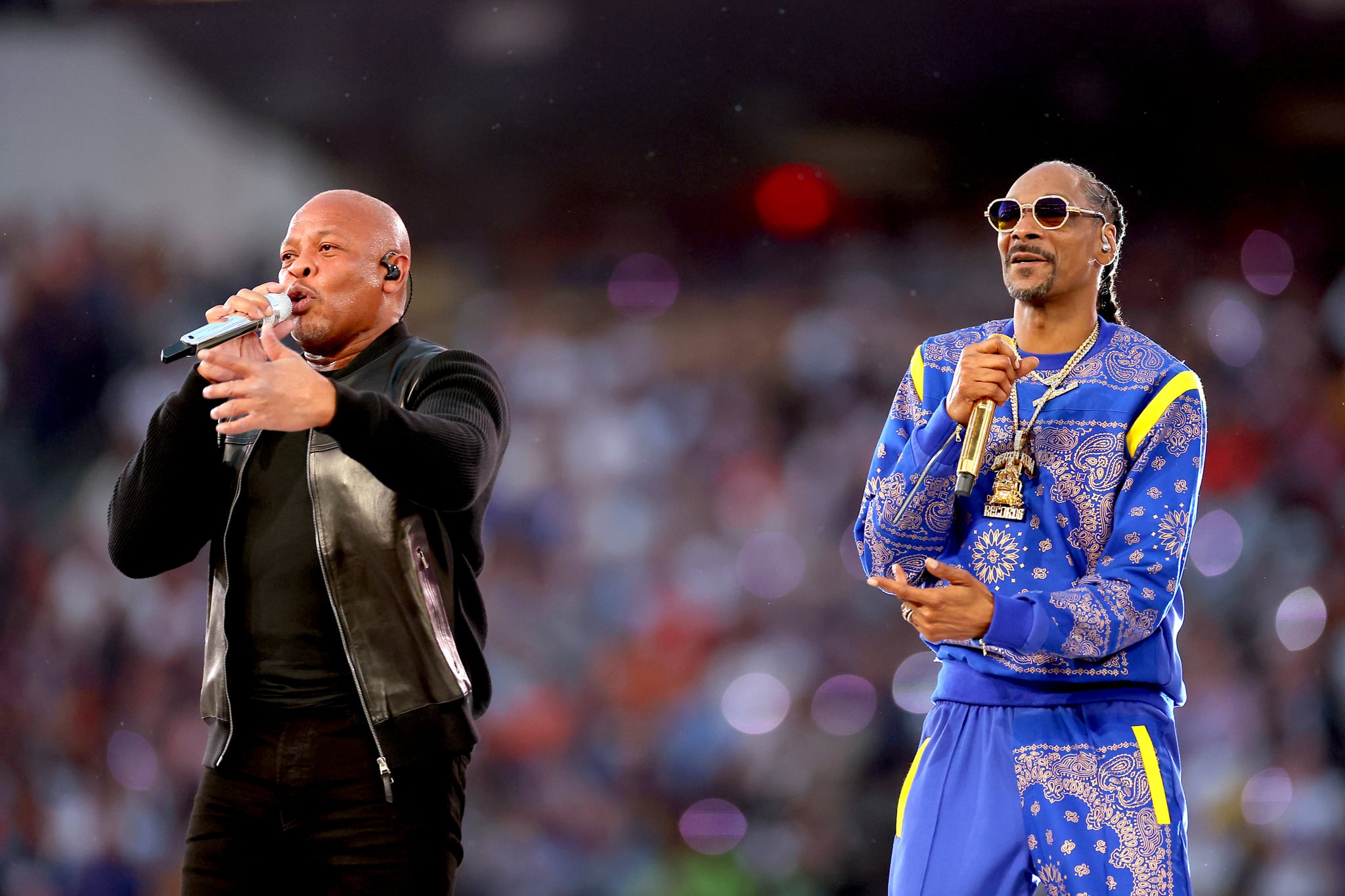 Hip-hop took center stage at the Super Bowl halftime show on Sunday as Kendrick Lamar, Mary J. Blige, Snoop Dogg, Eminem, Dr. Dre, and 50 Cent all made history together. Not only did six performers grace the stage for the first time in Super Bowl halftime history — only five were originally billed to perform — but it also marked the first time we’ve seen a full hip-hop lineup headline the show.

As a fan, it was surreal to see the genre get a national spotlight with its legends at the helm and receive so much praise. In all honesty, hip-hop deserved this moment: it’s long overdue. From the nostalgic West Coast hits that blasted through SoFi Stadium to the field of dancers doing a choreographed crip walk on live TV, it was both exciting and scary as hell to see hip-hop be consumed by such a wide audience. Hip-hop is one of the biggest genres in America, but it’s not observed on a platform as big as the Super Bowl on a regular basis. So, frankly, it’s dangerous, the way that hip-hop was commercialized for the Super Bowl this year, leaving it open to misinterpretation, critique, and censorship from “outsiders.” That’s a part of history that’s been synonymous with the genre since its inception.

Hip-hop got its flowers this year, but was hip-hop truly celebrated for all that it is?

The NFL surprisingly allowed an authentic celebration of hip-hop to take place during halftime this year. But in some ways, its new willingness to finally put the genre on a pedestal this year felt somewhat like a poor-spirited, PR-driven attempt to right its past wrongs (i.e. blackballing Colin Kaepernick and punishing its players for protesting). It makes you wonder about the real intentions behind this kind of show happening in 2022, especially for a genre that’s been setting global trends as far back as the ’80s. Hip-hop got its flowers this year, but was hip-hop truly celebrated for all that it is?

As expected, the league had the halftime show on a short leash as Dr. Dre confirmed to TMZ that a few “minor” changes were made. In regards to Lamar omitting his “If Pirus and Crips all got along” opening from “m.A.A.d city,” Dr. Dre said, “They had a problem with that, so we had to take that out. No big deal, we get it.” It also doesn’t go unnoticed that Lamar didn’t recite all his lyrics from “Alright,” either — editing his “and we hate po-po” line — though Dr. Dre later made up for it by rapping his “still not loving police” lyric from “Still D.R.E.” And Eminem doubled-down on the defiance by kneeling in honor of the Black Lives Matter movement. Despite the adjustments made, the epic performance still achieved what it set out to do: proving that hip-hop is a crucial part of American culture that deserves to be saluted. Even if many people didn’t understand the magnitude of the show this year, those of the culture know it was more than necessary to bust that glass ceiling for future rap artists, to ensure that these kinds of cultural moments aren’t still “making history” another 20 years from now.

Aside from the Super Bowl game, there’s no doubt that the halftime show was all anyone was concerned about. But there’s an obvious elephant in the room that still needs to be addressed: the performers themselves. We have to admit it feels tone-deaf to praise folks like Dr. Dre, Snoop Dogg, and Eminem on such a large platform with their problematic track records. Dr. Dre has a storied history of abusing women that’s been documented with accounts from R&B singer Michel’le and journalist Dee Barnes; Eminem’s music has a longstanding thread of threatening graphic violence against women; and a lawsuit against Snoop Dogg alleging sexual assault and battery was filed less than a week ago. Unfortunately for Blige, she was sandwiched in this lineup while she herself has experienced abuse.

We can’t expect the NFL to handle hip-hop with care when that’s not its top priority.

Looking at the bigger picture here, it’s odd that the NFL felt the need to monitor the content from the halftime show rather than concerning itself with platforming alleged abusers. However, its response is consistent with the league’s empty attempts to address abuse among its own players. So it’s not surprising that certain parts of hip-hop were embraced for the halftime show while others were ignored. If the league wanted to police the performance itself, it should’ve extended that same courtesy to its headliners as well. But we can’t expect the NFL to handle hip-hop with care when that’s not its top priority. More thought should’ve been put into selecting the artists who would always be remembered for spearheading this historical milestone, point blank.

There were a lot of entertaining parts about the halftime show to enjoy, but we cannot allow that excitement to erase the socially challenging, often controversial aspects of hip-hop, too — especially when the rest of the world is watching us, waiting to see what we do next.