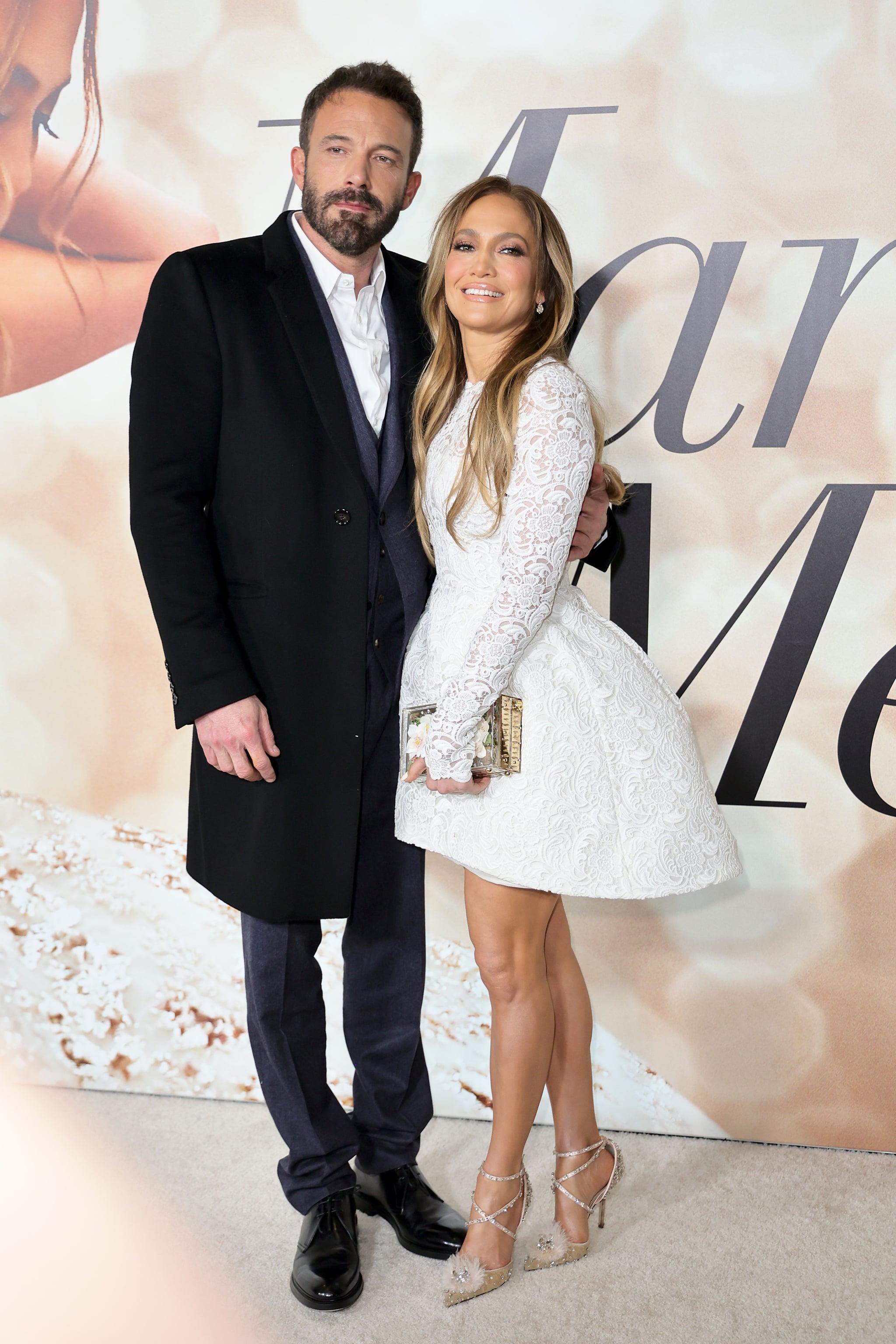 Jennifer Lopez and Ben Affleck doubled down on their marriage vows with a decidedly more elaborate affair in Riceboro, GA (a small town just outside of Savannah), on Saturday, Aug. 20. The couple — who were officially married at a Las Vegas wedding chapel on July 17 — celebrated their love with their friends and families in Georgia.

Lopez walked down the aisle in a white Ralph Lauren wedding gown with a long train, while Affleck wore a Ralph Lauren tuxedo with a white jacket. It seems white was the theme of the wedding, as the guests were also all decked out in their best white ensembles. Podcaster Jay Shetty was the officiant for the ceremony.

Ahead of the festivities, a source told People that the weekend would consist of a prewedding party, a ceremony, and “lots of fun.” Photos of Affleck’s Riceboro home shared by the happy couple showed a white outdoor structure with floral trees and other rustic yet glamorous decor.

The wedding celebration has been a long time coming for Affleck and Lopez, who initially dated in the early 2000s and were set to tie the knot in 2004 before breaking up. They rekindled their romance in 2021 and got engaged this past April.

In her On the JLo newsletter entry opening up about their Vegas nuptials — which POPSUGAR had independently confirmed via a marriage license — Lopez said it was “the best possible wedding we could have imagined. One we dreamed of long ago and one made real (in the eyes of the state, Las Vegas, a pink convertible and one another) at very, very long last.”

“When love is real, the only thing that matters in marriage is one another and the promise we make to love, care, understand, be patient, loving and good to one another. We had that. And so much more. Best night of our lives,” she wrote.

In the Sept. 1 edition of her newsletter, the “Marry Me” singer added that the beautiful Georgia ceremony had its fair share of setbacks, including a stomach bug that affected the entire wedding party and the looming threat of rain and thunder. Still, Lopez knew their wedding day would be perfect. “The truth is, I never had one doubt,” she wrote. “All week I felt the calm and easy certainty that we were in God’s hands . . .” The day of the wedding, the sun peeked through the clouds and the ceremony continued as planned.

When it came time to choose their wedding music, Affleck and Lopez were set on Marc Cohn’s “True Companion” as the “perfect wedding love song” — something they’d agreed on two decades earlier, when they were first engaged. Lopez even asked Cohn to surprise Affleck by singing the song during their nuptials. But the first song she walked down the aisle to was actually Cohn’s “The Things We’ve Handed Down,” which Lopez described as “a song about the wonderful mystery of children.”

“The twenty years between those dreams of youth and the adult world of love and family we embraced that day, brought more to this marriage than either of us ever could have imagined.”

“It was the perfect choice as our five children preceded me on the walk,” she wrote. “The twenty years between those dreams of youth and the adult world of love and family we embraced that day, brought more to this marriage than either of us ever could have imagined. We weren’t only marrying one another; we were marrying these children into a new family. They were the only people we asked to stand up for us in our wedding party. To our great honor and joy, each one did.”

Reflecting on the initial start of her relationship with Affleck, Lopez added that the time between their 2004 breakup and eventual reunion gave them time to grow and form a bond stronger than ever before. “Nothing ever felt more right to me, and I knew we were finally ‘settling down’ in a way you can only do when you understand loss and joy and you are battle tested enough to never take the important things for granted or let the silly insignificant nuisances of the day get in the way of embracing every precious moment,” she wrote. “We find ourselves in that long-desired time of life: having gratitude for all that life has shown us, even its trials and tribulations. That night really was heaven.”

Closing out the newsletter — which included more wedding photos — Lopez added, “Years ago, we had no idea the road ahead would mean navigating so many labyrinths and hold so many surprises, blessings, and delights. It all culminated in this moment, one of the most perfect of our lives. We couldn’t have been happier. I wish all of you the same kind of happiness . . . the hard-earned kind that’s all the sweeter for the journey that came before it.”