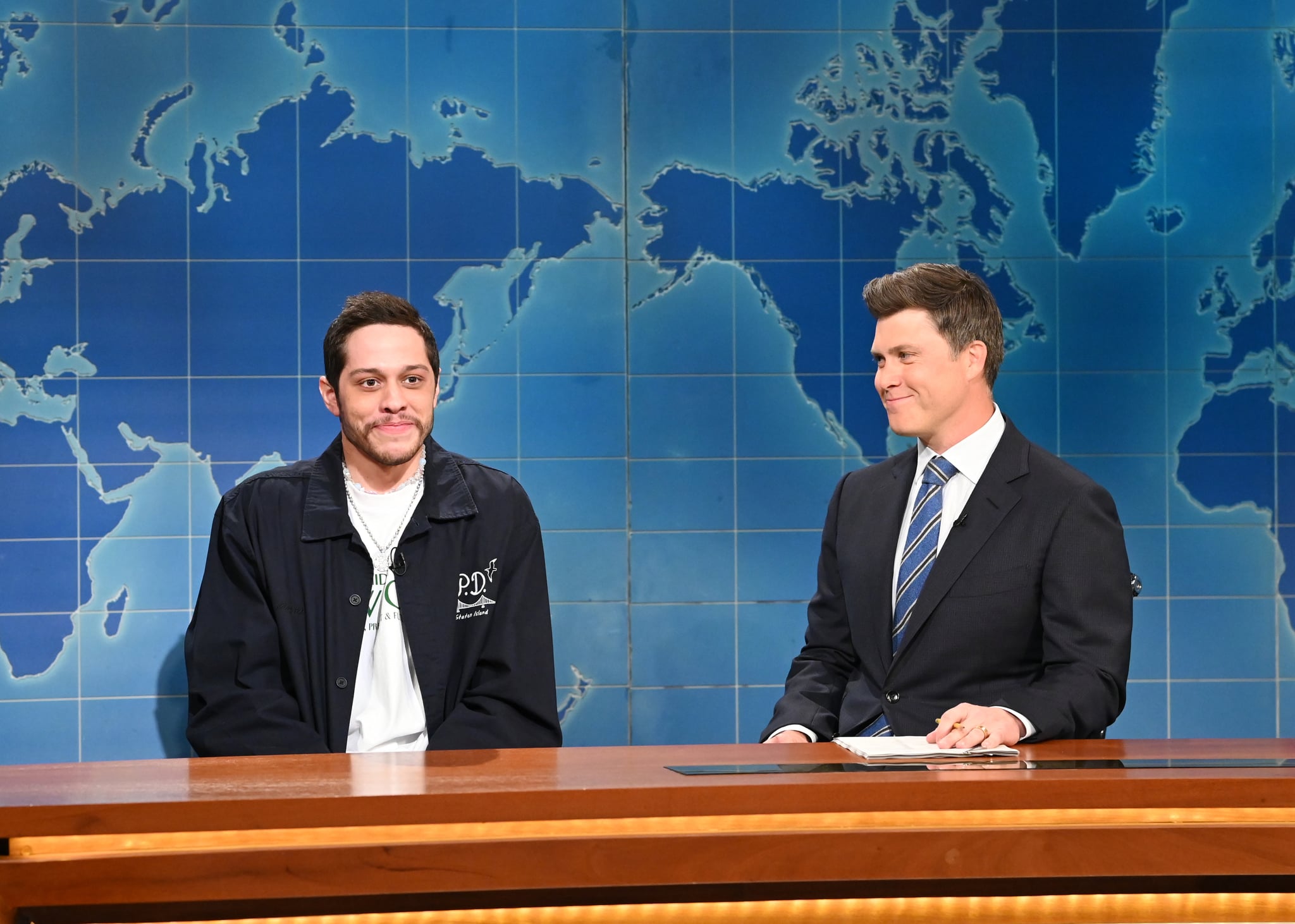 It’s the end of an era. After eight years, Pete Davidson has said goodbye to “Saturday Night Live.” The “King of Staten Island” star bid farewell to the series during the “Weekend Update” segment of the May 21 season finale, joking that executive producer Lorne Michaels “accidentally gifted me a sock, so I’m free.”

Throughout the segment, Davidson nodded to his storied dating history while also squeezing in plenty of his trademark self-deprecating jokes. At the start, he joked with “Weekend Update” host Colin Jost about how even he’s shocked by his success. “I never imagined this would be my life,” he said. “Back then, I was just a skinny kid that no one knew which race I was. And now everyone knows I’m white because I became hugely successful while barely showing up to work. Look at me now, I’m aging like an old banana.”

Davidson’s farewell wasn’t all jokes though. In between name-checking Kanye West and Ariana Grande, he offered a sincere thank you to Michaels for taking a chance on him even though the executive producer didn’t initially think he was right for the show. When he was hired, Michaels told him, “let’s screw this up together.”

“And that’s exactly what we did,” Davidson continued. “And that’s why people who don’t think I deserve this job shouldn’t hate me, since we have so much in common. Like, if anything, I should inspire hope that literally anyone could be on ‘Saturday Night Live.'”

As the update drew to a close, the comedian allowed himself to get serious about just how much his time on “SNL” has meant to him. “Thank you to Lorne for never giving up on me or judging me, even when everyone else was,” Davidson said. “And for believing in me and allowing me to have a place that, like, I could call home with memories that will last a lifetime.”

Shortly before the episode aired, Davidson shared a lengthy farewell message to “SNL” fans via “SNL” and “King of Staten Island” writer Dave Sirus’s Instagram. “When I got the show I was 20 years old and I had no idea what I was doing,” he wrote. “I still don’t but especially back then. I wasn’t really a sketch performer I was just a stand up. I knew I could never keep up or go toe to toe with a Kenan Thompson or a Kate McKinnon so I was super scared at figuring out what I could possibly bring to or do for such a historic, respected show and platform. I figured since I’m a stand up I’ll just try my stand up and personal bits on Weekend Update as myself and I’m so glad I did. I got to share so much with this audience and literally grow up in front of your eyes. We were together through the good and the bad, the happiest and the darkest of times. I owe Lorne Michaels and everyone at SNL my life.”

Davidson went on to thank his fans and “SNL” family for “having my back and sticking up for me even when that wasn’t the popular opinion.” He continued, “Thank you for teaching me life values, how to grow up and for giving me memories that will last a lifetime. SNL is my home. I’m so happy and sad about tonight’s show. For so many reasons I can’t explain. Can’t wait to be back next year in a [John] Mulaney musical number.”

Davidson joined the cast of “SNL” back in 2014 when he was only 20 years old and still a relatively unknown comedian from New York’s Staten Island. Since then, he has catapulted himself into the limelight, making a name for himself with unforgettable characters like the nonchalant Chad, standout performances in the “Weekend Update,” and viral skits like “Jasmine and Aladdin,” which he performed alongside his now-girlfriend, Kim Kardashian.

As one of the youngest cast members in “SNL” history, Davidson started off with smaller roles, winning over audiences with his dry and often self-deprecating humor. However, as the years went on, his presence became more known, and his love life started to pique the interest of fans and media alike. After he missed two shows at the beginning of this season, viewers began to wonder why Davidson was gone and when they would see him perform again. However, after spending time filming his new horror thriller, “The Home,” Davidson eventually returned.

His increasingly busy schedule could be another reason for his departure from “SNL.” But in Davidson’s own words, he’s even shocked he’s been with the cast for this long. When asked in an interview with The Hollywood Reporter about whether he would ever do an 18-season run like Kenan Thompson, Davidson responded, “Yeah, I’m good. I’m surprised I made it to seven. I’m ready to hang up the jersey.”