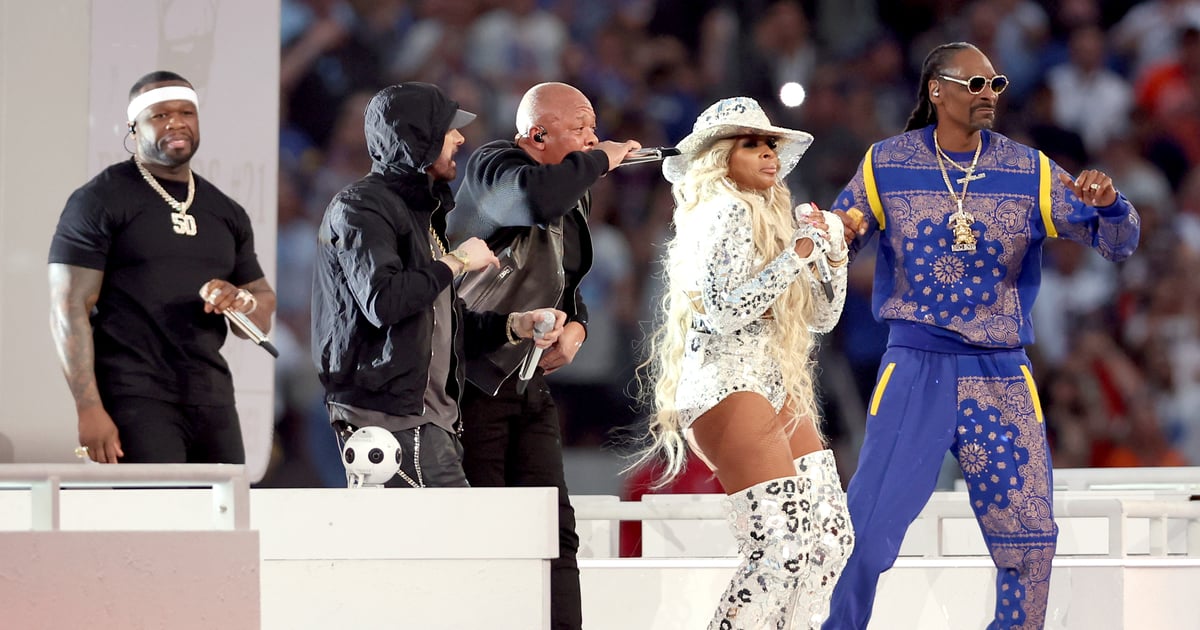 Never did we think five artists would grace the Super Bowl halftime stage together. But this year’s grand performance from Kendrick Lamar, Snoop Dogg, Mary J. Blige, Eminem, and Dr. Dre, plus a surprise appearance from 50 Cent, blew our minds and made history all at once. The six music icons took over the SoFi Stadium in Inglewood, CA, on Sunday for a celebration of West Coast hip-hop all orchestrated by Dr. Dre.

The epic performance took us through a medley of coastal hits, from Snoop and Dr. Dre’s “The Next Episode” and “California Love” to Lamar’s “m.A.A.d City” and “Alright.” 50 Cent popped up to perform “In Da Club,” while Blige took us way back with her songs “Family Affair” and “No More Drama.” Eminem helped close out the show with his “Lose Yourself” anthem (assisted by Anderson .Paak on the drums), as Dr. Dre brought it home with his signature song “Still D.R.E.”

The mind-blowing performance from the hip-hop and R&B legends reminded us just how much these genres dominate the culture. And all of them have their hands full with very busy solo careers this year. Lamar has fans on the edge of their seats waiting for his next album to arrive; Blige just released her latest album, “Good Morning Gorgeous,” and is gearing up for season three of “Power Book II: Ghost;” Eminem opened up his Detroit restaurant back in September and held a pop-up for it in Los Angeles this weekend; Dr. Dre just released new songs for the first time since 2015; and Snoop Dogg recently acquired ownership of Death Row Records — though that news was followed by a lawsuit for an alleged sexual assault and battery incident.

Each of these artists has a proven track record in music, but seeing their star power all come together on stage for the first time ever made for one hell of a show. Ahead, take a look at some moments from their historic Super Bowl halftime performance!