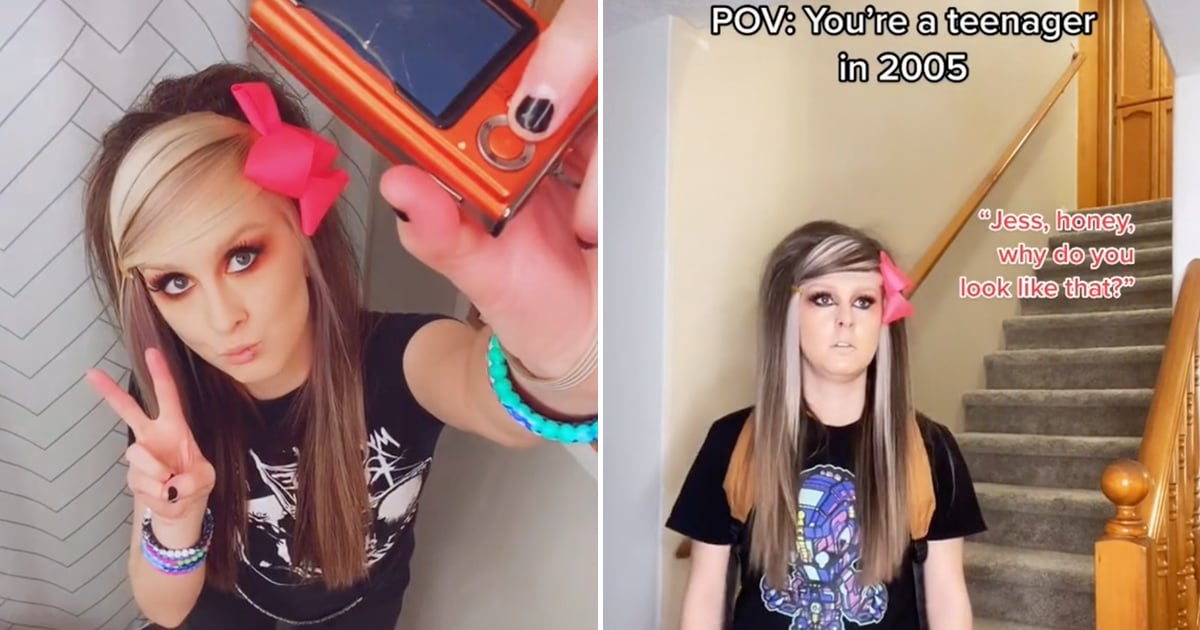 Hot Topic leggings, Claire’s headbands, and rainbow Silly Bandz were a constant in my middle-school days. But years after stuffing every last band T-shirt in a box and pushing it deep in the back of my closet to be forgotten, Jessica Conrad pulled an Evanescence and said “wake me up inside” to all of my cringiest teenage moments. The TikTok creator, who’s been posting videos since January 2021, struck a chord with former emo kids and scene kids alike, myself included, when she began posting her “Emo/Scene Kid” series, in which she re-enacts painfully accurate outtakes from life as a teenager in the 2000s.

For some, Conrad’s character might come off as a caricature of a stereotypically angsty teen. For others who lived through the “rawr means I love you in dinosaur” days, her Y2K-inspired videos are a deeply relatable nod to the past. “I hear, ‘Oh, I went through this, too,’ or ‘You’re describing my life,’ or ‘I had this exact same outfit,” she tells POPSUGAR. “I’m really grateful for the opportunity to be able to make people happy and do something that I love at the same time.”

“Really, were any of us as good-looking as we thought we were at that time?”

Conrad’s most popular video to date is one of her earliest, in which she’s waiting at the bus stop and gets a compliment on her shirt as Simple Plan’s “I’m Just a Kid” plays in the background. Since becoming part of the “Emo Renaissance,” she’s released dozens of videos re-creating scenes from her life as a teenager, including angsty arguments with parents, moody journaling sessions, and snippets of what it was like to have a Myspace crush in the early aughts.

Conrad’s first TikTok video, a lipsync to Aly & AJ’s “Potential Breakup Song,” features a pink Motorola flip phone, the accessory of choice for all 2000s teen-movie protagonists. The phone has since become a staple piece for her scene-kid “costume”: a pink bow clipped over shaggy, side-swept bangs, a My Chemical Romance T-shirt from 2006, black skinny jeans, and countless rainbow wristbands. “Really, were any of us as good-looking as we thought we were at that time?” she jokes.

While her comedic sketches are a spoof of her past self — a 12-year-old with a passion for Fall Out Boy and Panic! at the Disco — Conrad’s content has become a place for thousands of former scene kids to connect. “I’m really grateful that I was able to make so many people happy. For me, I wasn’t in the best space mentally and I needed more of a creative outlet, and it ended up translating into something far bigger than I could even ever imagine,” she says, adding that she began making videos after she lost her dad. “I get messages from people that say, ‘I lost my best friend, I lost my husband, I’m going through this really tough time, but your videos always make me smile.’ It’s nice to be able to give that to people and offer a level of comfort.”

As bands like MCR put out new singles and the emo trend returns, Conrad, who briefly explored a career in acting in the past, plans to continue her nostalgic scene-kid series and take her acting talents beyond the social media platform. “Being on TikTok and making sketches again has definitely sparked my love for theater again, and I would love to return to acting and maybe be on a big screen or a television somewhere,” she says.

Whether you identified as a scene kid or emo kid in the 2000s or you know someone who was swept up in the “rawrasaur” trend, relive a little piece of the past ahead.